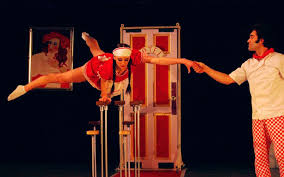 What? Don Quixote - Harlow ballet association
Where? Harlow Playhouse in Harlow
When? Thursday 18th - Sunday 21st April 2019
Don Quixote, originally choreographed by Marius Petipa in 1869, and recently performed by the Royal Ballet, has now been adapted and directed by Michael Branwell for the Harlow Ballet Association. This exciting, vibrant ballet blends fantasy with comedy and is set amongst the windmills in the sunny Spanish countryside. The colourful costumes and beautiful music by Ludwig Minkus will delight all.
What? RHS Hyde Hall
Where? The Royal Horticultural Society, 80 Vincent Square, London
When? Open year round
RHS Garden Hyde Hall in rural Essex is a place where you can unwind in stunning natural surroundings while your kids run around, play and explore. To start with, there’s a giant 7-metre Higgledy Hyde woodland tower to keep your cheeky monkeys entertained with slides, swings on ropes, wobble boards and much more. And this is just the beginning...
What? A Midsummer Night's Dream
Where? Chelmsford City Theatres, Fairfield Road, Chelmsford, Essex
When? 20th - Saturday 23rd March 2019
A Midsummer Night’s Dream is a wonderfully romantic, comic tale, set in a moonlit woodland in the realm of fairyland. The fairy King and Queen, Oberon and Titania, argue over Titania's refusal to give up her changeling boy to Oberon; he has become quite jealous of her giving him so much affection. He sends Puck, his servant, to find a magic plant to cast a spell on Titania. You can only imagine the trouble this causes.
What? Mum2Mum Market Southend
Where? St Thomas More School, Kenilworth Gardens, Southend On Sea, Essex
When? Saturday 30th March
Mum2mum Markets are award winning indoor nearly new sales. At our Southend sale we will have around 30 stalls of high quality, nearly new items (up to 90% off the RRP!) and a small selection of businesses offering goods and services of interest to parents. Refreshments will be available and the first 100 buyers through the door will receive a free goody bag!
What? Don Quixote - Harlow ballet association
Where? Harlow Playhouse in Harlow
When? Thursday 18th - Sunday 21st April 2019
Don Quixote is a comical character, who after reading too many romantic novels, sets on a journey across Spain as a chivalrous knight, with his faithful, if dishonest, servant, Sancho Panza. Searching for adventure, they arrive in a village on the day of its Annual Fiesta, where they meet Kitri and Basilio, a young couple in love. Kitri’s father, however, wants her to marry the wealthy nobleman, Gamache. Don Quixote decides to intervene…
What? The Edge of Oil City - A Walk in Canvey Island
Where? Benfleet Station, South Benfleet
When? Saturday 4th May 2019
Starting at Benfleet station you’ll walk the wall that keeps low lying Canvey from flooding, as it did in 1953 with disastrous consequences. Despite the risk of flooding, Canvey Island has been inhabited since the Romans and Rob will tell the story of the island as we walk, including the plans to develop the island as a tourist destination in the 19th century, a visit to the post apoclyptic landscape of an abandoned oil refinery, and local legends Dr Feelgood. And it being a guided walk we will of course stop at a pub that Charles Dickens visited!
What? Adventure Island
Where? Adventure Island, Sunken Garden, Western Esplanade, Southend on Sea, Essex
When? Various times and dates throughout the year
Rides and attractions at Adventure Island include Rage, a 75ft roller coaster with a more-than-vertical drop! Over The Hill, a new dark ride experience that is your best worst nightmare! As well as three more roller coasters, Barnstormer, Mighty Mini Mega and Green Scream, intense rides include Dragon's Claw, Vortex, Scorpion, Ramba Zamba and Sky Drop.
What? Transport Museum Model Railway Show 2019
Where? Canvay Island Transport Museum
When? Sunday April 21st 2019
The first event in their 40th anniversary year, the model railway show is going to be popular this year. With model rail/tramway layouts, vehicle displays, sales stalls, refreshments, and free parking, this is an event for every train and model train enthusiast!
Back to articles