The history of Benfleet 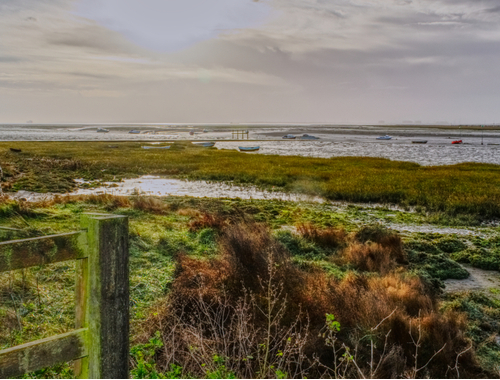 By learning more about the past of where we live, we can all appreciate and love certain landmarks and historic sites more than ever.
So here’s a brief overview of the history of Benfleet and how it came to be the town it is today!
Benfleet from the start
Up until the time of the first Great War, Benfleet was a country townlet of four to five hundred people. Most of them lived in cottages grouped about the lovely (mainly 13th century) Church, with three inns – the Hoy, the Crown and the Anchor – as focal points. Below the Church was the railway station on the main line from Fenchurch Street to Southend. Beyond that was the Creek separating Canvey Island from the “mainland”.
Behind the village rose the wooded hill near the top of which the Vicarage had been built in 1852. There were a few outlying farms and a scattering of houses; but the main impression must have been of a sleepy, isolated country parish, overlooking Canvey to the broad waters of the Thames Estuary. The inhabitants mostly made their living by agriculture, with a few boatmen and boat-builders and small tradesfolk.
Canvey Island
Canvey Island was once little more than a mud-flat, reaching out into the Estuary, partially covered by water at high tide.  In the 18th century, Dutch engineers built a strong earth wall all round it, where half a dozen farmers tilled the rescued soil.
Growth of the population
After the war the attractions of both Benfleet and Canvey as places to retire to brought along an increasing number of residents, mostly from the eastern parts of London; others found that, with a one-hour train service to London, it was practicable to live in the country and work in town.
Further, Canvey’s possibilities as a seaside resort were discovered and exploited to good effect.  For the East End Cockney there was a lot to be said for beaches little more than an hour’s journey from Bethnal Green.
By 1927 this post-war “development” was in full spate. Planning was primitive to non-existent; restrictions on type and quality of building were ignored. A dozen or so tracks, compact of grass, weeds or dust in summer, and of squelchy mud in winter, were designated as roads and lined irregularly by bungalows and villas, often of the cheapest materials and crudest design.
So it was that by 1927 Benfleet’s population had risen to two thousand, and the majority were new-comers.
The Battle of Benfleet
The Battle of Benfleet took place between the Vikings and Saxons in 894 A.D. This was towards the end of the Saxon period, and the Thames and other waterways made the area vulnerable to Viking attacks.
Benfleet was used as a Viking base. However the Vikings were defeated in the battle by the army of King Alfred under the command of his son Edward the Elder and his son-in-law Earl Aethelred of Mercia. Subsequently a church was built by the Saxons in thanksgiving for the victory over the Vikings. St Mary's church is the most recent church building occupying this site.
South Benfleet School
South Benfleet School was opened on its current site on April 9th 1926 as an ‘all age’ school, to serve the educational needs of the whole of South Benfleet.
The school was built to replace the 'Old School' situated in School Lane near the station (now a car park!).
Benfleet Downs
The Benfleet Downs are also known as Hadleigh Downs, and they form an escarpment overlooking Benfleet creek and Hadleigh Marshes. The public had been allowed access to Benfleet Downs by the Barnes family who owned some of it. One of the last acts of the Benfleet Parish Council was to purchase 30 acres of The Downs in 1929, with a view to it becoming a public open space.
Today the downs and the marshes form part of the Hadleigh Country Park, or Hadleigh Castle Country Park, which affords walks, cycle routes and bridle ways. They give an impressive panorama over the River Thames to the hills of Kent and imposing views of Hadleigh Castle.
Back to articles